FRA Puts Amtrak Under Safety Watch The Federal Railroad Administration has instituted a special safety watch on the financially ailing Amtrak, and Amtrak operating officials have begun a series of "safety blitzes" to caution all train crews, maintenance forces and shop workers to remain alert on the job. No recent major accidents or passenger injuries have been attributed to Amtrak employees distracted by the company's financial problems or their own job prospects. The number of serious rule violations, however, has spiked upward this month, and the 20 violations so far in April tie the worst month in recent years. (April 30th, thanks Bengt Mutén)

New Boss at Amtrak David L. Gunn was named president of Amtrak Friday the 26th. Has headed transit agencies in New York, Washington and Toronto. He issued a statement saying, "I have always been a proponent of a strong national passenger rail network." A source close to Gunn pointed out that "national" network has become a code word for long-distance trains, most of which lose money. Congress is unlikely to make any substantive changes to Amtrak's structure this year but probably will not be able to avoid substantive action next year, the Washington Post writes. Meanwhile, congressional appropriators are struggling to locate enough money this year to keep Amtrak from collapsing before then. See also Amtrak press release.

Stockholm Buys 55 New Commuter Trains Alstom is building 55 commuter trains for Storstockholms Lokaltrafik for €400m. The 160 km/h trains are 95% recyclable, 105m long, 3,26m wide and consist of six cars. The floor is at the same height as the platform in 92% of the train. They will take 380-390 seated passengers and 530 standing. SL has contracted out operation of its commuter trains to Citypendeln. Two trains will be delivered in the fall of 2004 so that they can be tested in winter conditions. SL has specified that the trains must be able to run after five minutes of warming up in 35°C. This extreme requirement is partially in order to ensure reliability on Stockholm's congested rail network, where one late train can throw the system into chaos. See also SL press release. (April 23rd)

Alameda Corridor Inaugurated The first freight train rolled down the Alameda Corridor on April 12th, a new line that cuts through 20 miles of Los Angeles. The $2.4bn corridor will speed movement of about $100bn of imported goods each year and boost US trade with the Pacific Rim. Initially, the Alameda Corridor will handle 30 to 35 trains a day, that number may grow to 100 within 10 years, as the volume of goods passing through the ports of Los Angeles and Long Beach doubles. By consolidating four rail lines serving the ports, the project eliminates more than 200 crossings and doubles the speed of trains to as much as 65 km/h. See also official site and maps.

Feds Approve CSX Safety Work Satisfied with improvements in CSX Transportation's safety record since 2000, federal rail officials said they see no need to extend a safety compliance agreement past its May 1 expiration -- despite the recent derailment on CSX tracks in Florida that killed four people. This accident seems to have been caused by a track problem. (April 23rd)

Four Dead in Amtrak Derailment Four people died and 153 were injured, 20 critically, when an Amtrak train derailed Thursday the 18th at 17:08 in rural northeastern Florida. Amtrak train No. 52, an Orlando-Washington Auto Train, had 425 passengers and 28 crew members aboard, two engines, 16 passenger cars and 23 auto racks containing at least 200 vehicles. Sources close to the investigation said the track had been inspected Thursday morning, and the road master in charge of the track was aboard another passenger train at 14:38 Thursday that ran over the very spot where the derailment occurred. No problems were detected with the track in the morning or the afternoon, the sources said. See also Washington Post story, MSNBC video, BBC story, and Amtrak PR. (April 19th, thanks Bengt Mutén, Toma Bacic, and HDBtrains@aol.com)

New Beijing-Hong Kong HSR China is planning to build a high speed rail link from the capital Beijing to the southern city of Guangzhou, cutting the journey time from almost 24 hours to just 10. The new train line would link to a planned high speed connection to Hong Kong. However, first priority is completion of China's first long distance high speed rail link, from Beijing to Shanghai. But work on this project has yet to begin - amid reports of differences of opinions among officials concerning wether maglev or conventional technology should be used.

CN Boss Frets Over Border Controls Canadian National's CEO Paul Tellier says border controls, which have been intensified since September 11th, should be made in a way that doesn't slow down trains. He says trains should be cleared by customs people at their point of origin, so that they can go directly to their destination without stopping at the border. He made his comments at the annual shareholders' meeting in Halifax Wednesday the 17th, where executives basked in the glow of a CN share price that rose 73% last year. (April 18th)

Safety Inspectorate Slams X 2000 Maintenance Again The Swedish Järnvägsinspektionen authority has found inadequacies in X 2000 maintenance in Euromaint's main Hagalund shop in Stockholm, including excessively worn brake pads, leaky brake systems, incorrect wheel dimensions, etc. Järnvägsinspektionen found unacceptable conditions in the shops a year ago and a follow-up inspection a few weeks ago turned up more problems. A third inspection was made last week, and a subsequent report may disallow work at the shop. But informal contacts suggest Järnvägsinspektionen is happy with progress.

Fewer Passengers at Eurostar The number of Eurostar business and leisure travellers fell 6,6% in the first quarter of this year, but the company said there were signs of a revival in both markets. An analyst said it is too soon to judge whether Eurostar would miss the target of more than 10m passengers in 2006, because the new high-speed Channel Tunnel Rail Link in Britain will change the market by cutting 35 minutes off travel times. See also CTRL site and Eurostar site.

Weedkilling in Denmark The Danish rail administration, Banestyrelsen, has developed a new weedkiller system where a computer detects green areas larger than 5x5cm and sprays them with pesticide. The new equipment reduces the amount of pesticide used by 50% compared to manual spraying. The train can run at 45 km/h while killing weeds. (April 15th)

Melbourne Unifies Public Transport Melbourne, Australia, is set to return to a unified public transport system later this year with trains, trams and buses operating under one name in a bid to win back passengers. This sees a return to a style of operation abandoned in the mid-1990s when the system was split up as a prelude to privatisation and to encourage competition. This caused confusion, especially for visitors to the city. Private operators would retain ownership of individual companies and routes, but the overall system would be rebranded and marketed as a single unit under one name. (April 15th, thanks David Bromage)

Jan Forsberg Takes Over at SJ Swedish passenger train operator SJ has a new boss, Jan Forsberg, since February 21st. His first priority is to make the trains run on time. He comes from SAS, the airline, where he has worked with catering among other things. His predecessor Kjell Nilsson resigned in September after a spate of broken axles on X 2000 trains. Mr Nilsson wanted to buy the maintenance supplier but the government, which owns both SJ and maintenance company Euromaint, refused. Euromaint is for sale. See also SJ press release.

Fast German-Swedish Freight Freight trains between Germany (Maschen) and Sweden (Hallsberg) are being speeded up by up to two hours since April 6th by eliminating the change of locos at Øresund. One Danish dual-system EG3100 locomotive now runs all the way from Hallsberg, Sweden's largest marshalling/classification yard 200km west of Stockholm, through Denmark to the German-Danish border. After the new timetable takes effect June 16th, the trains will not change locos at all on their way to Maschen, a huge classification yard near Hamburg in northern Germany. The direct trains started running in June 2000 after the Øresund bridge opened between Malmö, Sweden and København, Denmark. See also Nerikes Allehanda stories 1 and 2, Green Cargo press release and Eurail Press bulletin. 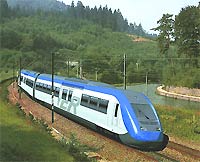 SNCF Gets 51 ZTERs French SNCF has ordered 29 three-car electric regional 200 km/h trains, known in France as ZTERs, for €152m. Each train seats 217 passengers. This order brings the total number of ZTERs ordered to 51. Their purchase is financed by the Regions of France as follows: Centre (15 trains), Brittany (17 trains), Loire (14 trains), Poitou-Charente (5 trains). Bombardier will supply 29 trailer cars and 58 carrying bogies for the trains for €29m. (April 10th, thanks Toma Bacic)

One Dead in Portugal A head-on collision Thursday April 4th between a passenger train and a locomotive killed five people and injured seven others. It was Portugal's worst rail accident in five years. (April 10th, thanks Toma Bacic)

Australia Cancels Speedrail Follow-up Study The Australian government has abandoned plans for a high speed rail network along the east coast because it would cost between A$33bn and A$59bn. A scoping study has been disbanded before it was completed. The Deputy Prime Minister and Minister for Transport and Regional Services, John Anderson, said to have continued with the study would have been an exercise in false hope. The preliminary study, which only cost A$2.3m of the original A$20m budget allocation, had allowed the government to conclude that further investigation was not warranted.

David Bromage comments: "The methodology the study used was flawed from the start. It assumed that the project would need to be fully government funded and ignored two previous proposals to build the line with private funds. Both projects were abandoned because of government inaction and indecision. It also ignored that fact that around A$30bn would need to be spent on a second airport in Sydney, and there is strong opposition to this." David is one of three editors of www.railpage.org.au. (April 10th)

Perth Rail Project Disagreement A route different to the preferred option for the city section of the Perth to Mandurah (Australia) rail link is cheaper and better, a new report has found. The project will integrate the Northern Suburbs Transit System with the new South West Metropolitan Railway. See also official page and route map. (April 10th, thanks Alan Reekie)

Tracklaying Begins Alice Springs - Darwin The first track on the Alice Springs - Darwin railway will be laid early April. 507km of land has been cleared for the 1410km line and 266km of earthworks completed, including 6 new bridges. 112 000 of the required 2 million concrete sleepers have been cast. The first of four locomotives for construction trains has been carried by road from Alice Springs to Katherine. See also press release and photo of the action in the outback. (April 10th, thanks David Bromage)

Tel Aviv City Railway Foreign companies involved in mass transit design and engineering showed enthusiasm at a February conference for the Tel Aviv Mass Transit System project, scheduled to start operation in 2009. Estimated at an investment of NIS 4bn, the 22km red line, considered Israel's largest civilian project will be constructed under the BOT (Build, Operate, Transfer) method. The winner will construct, operate and maintain the railway and its stations for 32 years. Officials say the line's prequalification tender will be published in the second half of this year. The entire system, once up and running will include four lines, 68 km of tracks. A total of 117 stations are expected to be constructed, nine which will be underground. (April 10th)