German DB AG is performing noise testing at 320 km/h with an ICE3 train as part of an EU project to determine standards for noise. The tests are being done on a 250m segment of track on the Berlin-Hannover line, which has had its rails ground extra smooth and extra rubber pads inserted between the rails and sleepers. A Thalys train was tested on the same line last week. Other tests are being performed in Belgium, France, Italy, and Spain, all as part of Noemi, a project of the European Association for Railway Interoperability. The work of AEIF is to draw up technical specifications for interoperability and to bring together representatives of the infrastructure managers, railway companies and industry. See also Eurail Press story.

Deutsche Bahn and Bombardier have developed a pantograph with variable pressure against the catenary, ensuring optimal pressure at all times. The result is higher speeds, less noise, and less catenary maintenance. At speeds of 280 km/h and behind noise screens, the pantograph is the source of the most noise, and the new technology can lower pantograph noise by half. The technique is especially useful when using several pantographs in one train, such as when using multiple EMUs. See also Ny Teknik story and IRJ bulletin. (August 25th)

Transrapid, the 430 km/h German magnetic levitation train, has had a bad summer. The 30 km Shanghai airport train was shut down due to the sars epidemic and because the power transmission melted. It will be opened again in October at an estimated cost of up to €35m. And hopes that a new 1300 km, 450 km/h railway between Beijing and Shanghai would use the maglev technology are fading as Chinese officials are reported to favour tried-and-tested conventional Chinese-made trains going "only" 350 km/h. These would take 4 hours while Transrapid would do it in 3. Finally, the province of Nordrhein-Westfahlen in June decided against financing a maglev in the Rhein-Ruhr (Düsseldorf) conurbation. See also Ny Teknik story in Swedish.

In the eastern US, the Sobig email virus brought down CSX' communications network on August 20th. The network is used by signals which went dark. Many of Amtrak's long-distance passenger trains were delayed up to six hours, while commuter trains in Washington DC were cancelled. The virus has also affected Swiss SBB's internet services, though not train operation or safety systems. And in China, the Blaster virus stopped ticket sales for five hours for the Guangzhou-Hong Kong through-train. See also press release at CSX. (August 25th)

Alstom has secured its long-term future with a government-backed €2,8bn rescue package, it said on Wednesday the 6th. The company said it had been forced to "accelerate and broaden" its restructuring after deteriorating market conditions and a liquidity crisis created a vicious circle, sapping the confidence of customers and creditors in its financial stability. Alstom suffered takeover rumours in April, and has lost 90% of its stockmarket value in two years. It also has five times more debt than assets. The rescue plan faces scrutiny from the European Commission. See also Europe1 story in French, Eurail Press bulletin in German, and IRJ bulletin in English. (August 8th) 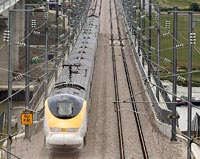 The Eurostar service reached a major milestone Wednesday the 30th as one of the trains reached 334,7 km/h on the new Channel Tunnel Rail Link, phase 1, the eastern part which will begin commercial service on September 28th. The western phase 2 will start service in 2007. Phase 1 saves 20 minutes and costs £1,9bn, while phase 2 saves another 15 minutes and costs £3,3bn. The time savings apply both to London-Paris and London-Brussels, with the former clocking in at 2 hours 15 minutes, and the latter at 2 hours flat in 2007. See also map, stories at FT.com, the Independent, BBC and CNN, and press releases at CTRL and SNCB.

A Eurostar train loaded with engineers and scientific equipment will be tested in England at 330 km/h on Tuesday the 8th. The testing will be part of getting ready to open the 74km first phase of the channel tunnel rail link, and will take place between Ebbsfleet in Kent and the mouth of the tunnel. The second phase of the CTRL involves building a tunnel beneath London from St Pancras to Stratford in East London where it will re-emerge above ground on its way to Ebbsfleet.