DB Changes Fare Structure German DB AG is struggling to win a public relations battle over the new fare system, in effect since December 15th, which makes it cheaper to book tickets in advance, and more expensive to buy them the same day. The BahnCard now also gives a 25% reduction in fares, compared to 50% before. Each passenger may also bring four companions who each pay 50% less. The deals may all be combined. DB has also started a companion service where passengers can find other people going to the same place, so they can get the 50% companion deal. This is called Mitfahrzentrale and the concept is widely used in Germany for car travel. (December 22nd)

German Transport Minister Wants Fast Privatisation The German minister of transport, Manfred Stolpe, wants the railway, DB AG, to be privatised closer to 2004 than 2008. He feels DB has been doing well economically and wants the momentum to continue. DB would be the only rail privatisation in Europe where ownership of the track would stay with the privatised train operating company. (December 22nd)

Acela Yaw Dampers Fixed? An insider tells Erik that Amtrak believes Bombardier has developed an acceptable redesign for the cracking yaw damper structure that attaches the bogie to the power car sides. The redesign includes structural repairs to the fractured side trusses of the power cars. Laboratory validation of the new design is still required; however, Amtrak officials are cautiously optimistic that this mechanical arrangement, which attaches the Alstom bogie to the Bombardier locomotive, will resolve most of the problems. See also "What are yaw dampers?".

National Express Quits Australia Financially troubled National Express has relinquished its Australian public transport franchises. The M Train and M Tram businesses in Melbourne and the V/Line country passenger services in Victoria will revert to government control from 21 December. M Tram is likely to be be transferred to rival Yarra Trams, and M Train to Connex. V/Line will be retendered next year. National Express has written off A$270m in investment since it took over the franchises in 1999, and will lose its A$130m performance bond. The performance bonds help offset the extra cost to the government for taking back the franchises. See also National Express press release and stories at The Age, the Herald Sun, The Australian, and the Australian Broadcasting Corporation.

Melbourne Routes to be Merged and Sold Melbourne's public transport system will revert to just one train and one tram network within a year under a major restructuring. M Tram and M Train - accounting for more than half the Melbourne rail networks - could be merged with other routes and back in private operation early next year. See also backgrounder on National Express' Australian adventure. See also map of Melbourne's trams and trains.

The V/Line trains will stay in government hands untill the regional fast rail project is completed in mid-2005. National Express will continue to run its Melbourne bus operations. • Clearances in Melbourne will have to be altered to accommodate new suburban trains, which are too wide for parts of the network. The ex-franchisee ordered 62 new trains at a cost of A$400m from Siemens. But the new trains come perilously close to some platforms and bridges. (December 22nd, reported by David Bromage)

Tellier Leaves CN for Bombardier Hunter Harrison is succeeding Paul Tellier as CEO of Canadian National. Tellier is moving on to Bombardier, which analysts say may mean Bombardier's problems are worse than expected, particularly the airplane part. Tellier is a former public servant and was at the helm as the CN was privatised. Both have been named "Railroader of the Year" by Railway Age magazine. CN runs scheduled trains, which is unusual among North American freight railways. See also press releases from Bombardier and CN. (December 22nd, thanks Bengt Mutén) 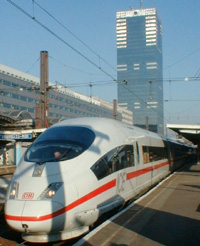 ICE3 Slowly to Brussels Three pairs of ICE3s will run daily between Brussels - Köln - Frankfurt am Main starting Monday the 15th. But as they have not yet been authorised to run on the new high-speed line between Leuven and Ans, they take about 14 minutes longer than planned, and just fail to make convenient connections at Brussels with the Paris - Brussels Thalys TGVs. (December 13th, reported by Alan Reekie who also took the photo)

Sulphur Trains Catches Fire in Alberta An 80-car freight train carrying molten sulphur derailed in southern Alberta, Canada, early Wednesday the 4th, causing a chemical fire and a brief evacuation of nearby residents. Nobody was injured, but the cause of the accident is unknown. (December 7th)

Swedish SJ Runs Out of Money Swedish SJ has gone through its capital and found its net value is negative. Neglected maintenance, useless old trains and unprofitable franchises are liabilities worth SEK1bn, about €110m. Since the company is bankrupt, it needs more money, which Leif Pagrotsky has said will be granted. Mr Pagrotsky is Minister of Industry, Employment and Communications. SJ was turned into a passenger train operating, limited company in January 2001. It is wholly owned by the government. See also Ny Teknik bulletin and SJ press release. (December 4th)

Swedish Rail Increases Market Share Automobile traffic in Sweden lost 4% of its market share in 1990-2001, and most of this share went to rail, reports the European Tourism Research Institute in Sweden. Part of the increase in passenger rail traffic is due to the introduction in 1990 of the fast X 2000 trains. Rail's market share averaged 8,4% during this time, while it increased to 10,3% in the last two years the study looked at. Almost one in five people travelling to Stockholm, Sweden's capital city, take the train. Eleven per cent of people in Stockholm travelling elsewhere take the train. (November 27th)

Palm Helps Amtrak Get it Right Ridership on Amtrak's west coast Vancouver-Seattle-Portland-Eugene Cascades service has increased 460% since the first train began operating in 1993, and 5,7% in 2001 alone. A technician travels with each train, troubleshooting problems and noting minor annoyances such as broken lights and toilets. The technician feeds all the information into a Palm device that feeds it to maintenance computers at night as the train undergoes routine maintenance. The state wants to gradually establish two-and-a-half-hour Seattle-Portland service by building a 177 km/h track parallel to the BNSF freight line. Studies by the state and Talgo say it would cost about $2.1 billion, a fraction of the estimates for new high-speed rail construction that doesn't use freight railroad rights of way. (December 2nd)

Connex Set to Win in Boston? Boston's commuter rail service is being put out to tender, and incumbent Amtrak has announced they are not bidding to run the trains. There are two bidders, Guilford Rail, and a joint venture between Bombardier, Connex, and a Boston transportation consulting firm. (December 2nd)