East Japan Railway rolled out its new prototype Fastech 360 Shinkansen train a month ago. It has cat ear-shaped air-brakes that fold up from the roof during emergency braking. The train will be tested at up to 405 km/h. When put in commercial service, the new trains will reach 360 km/h and do the 580 kilometers between Tokyo and Aomori in three hours, half the time it takes now. See also very similar story at Allheadlines.com.

Ten people died today after an explosion on a train from Patna to New Delhi in India. Authorities are unsure whether the explosion was caused by a bomb or by the gas cylinder of a cooking stove, sometimes carried by villagers on trains in India. In a separate incident, 20 home-made bombs were found on another train in a lawless part of eastern India, and four people were arrested. (July 28th) 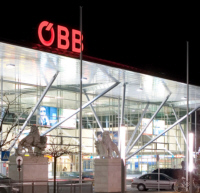 Austrian ÖBB and different levels of government have spent €202m in recent years on renovating ten stations including Linz, Graz and Innsbruck. On top of this, private interests have invested €250m, part of this for an office complex at the Linz station. Salzburg's new €40m station will be ready in 2010.

But the great crescendo comes in the country's largest city and capital Vienna, which gets a new northern station at Praterstern for €40m; the large Westbahnhof, renovated for €30m, will get an office complex and hotels. The southern and eastern stations will be replaced by a shiny new Zentralbahnhof at Südtiroler Platz for €450m. It will be Vienna's only through station, with a subway station for the U1 and also served by Schnellbahn commuter trains. See also ÖBB's station renovation pages, and UrbanRail.net's map of Vienna. (July 28th)

The British/European train leasing company Angel Trains has established itself in Poland. Thirty-six electric locos were ordered in March. Ten Bombardier Traxx F140 MS multisystem locomotives capable of operating under all four power supply voltages used in continental Europe will be equipped to operate in Poland, Germany and Austria. The locomotives are going to be offered to the Polish railway undertakings. (July 28th, thanks Konrad Grzegorzewicz)

Drivers on the London Underground are demanding more visible staff in the aftermath of the terrorist bombs. Among the demands are re-instated guards on the trains, gate-line staff that patrol ticket barriers, and breathing apparatus. See also Guardian story. (July 28th)

A number of Tube stations have been evacuated and lines closed after three explosions today. London's transport system is therefore being shut down. It is only two weeks since terrorist attacks shut down the system. (July 21st)

The BBC writes that any anti-terrorist equipment intended for public transport must not cause delays or line-ups, because people standing still are easy targets for terrorists. Aside from intelligence, trained dogs and humans are best for stopping terrorists once they get to the station. (July 13th)

Explosions happened in many London subway stations around 9 am today. Several busses also blew up. Reports say the subway explosions had something to do with power surges. Police have not confirmed much, but all trains and busses have been cancelled. For more information, listen to the radio or TV, since websites can become overloaded. (July 7th)

Austrian ÖBB is purchasing 20-24 trains for 230-250 km/h. It will spend €300m and the first trains are to be delivered in 2008. ÖBB had previously planned a train with premium fares but has dropped this for ordinary EuroCity trains with the new faster vehicles. The trains are meant to be powered by the existing "Taurus" series 1016/1116 locomotive. See also Der Standard's map of rail projects in Austria. (July 19th, thanks GF/ETE.org)

A crowded Pakistani passenger train rammed into another at a station today and a third train then plowed into the wreckage killing about 120 people and injuring hundreds, Reuters writes. About 1000 people were aboard each of the trains and many of the passengers were asleep at the time of the pre-dawn disaster. The general manager of Pakistan Railways said the crash was caused by a train conductor misreading a signal. See also BBC story. (July 13th) 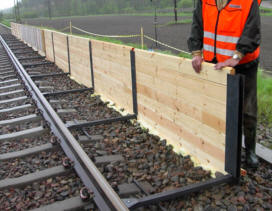 Swedish rail administration Banverket is testing a new type of small noise screen. It reduces noise by half and costs half as much as conventional large screens. It is about one metre high and sits about a metre from the track. It does not need groundbreaking and is affixed to the track by powerful magnets. It is a development of an even smaller screen tested last year, but which didn't reduce noise enough. 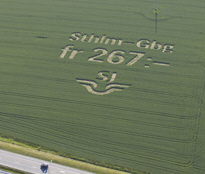 Swedish SJ is informing airline passengers about how cheap it is to take the train by cutting messages into fields at airports. See also SJ press release. (July 7th)