Testing has revealed that electromagnetic interference from controls driving the motors on British Virgin's Pendolino trains can change the lights on the signals. But Virgin says they will enter service on the 645 km London-Glasgow west coast route on schedule later this year. Virgin has so far received 15 of its 53 Pendolinos. But they are only running at 177 km/h in non-tilt mode and only on Tuesdays. Testing at 233 km/h (145 mph) is underway on Saturday/Sunday nights. The trains can accelerate from 0 to 160 km/h in 100 seconds. See also press release, backgrounder and specifications on the trains, the first of which was rolled out in July 2001. They are manufactured by Alstom; see also Alstom's Pendolino page.

Just days after the termination of a rival bid, Toll Holdings filled the breach yesterday when it launched a NZ$158 million takeover bid for the troubled New Zealand transport company Tranz Rail. It had already taken a 10,1% stake in Tranz Rail last week. If successful the bid will make Toll a dominant force in road and rail transport on both sides of the Tasman. Toll Holdings is a part owner of Pacific National, Australia's largest rail freight company. Toll's bid equals RailAmerica's withdrawn bid. See also Google News. (May 30th, reported by David Bromage)

With many of its capital assets already sold and leased back, New Zealand Tranz Rail has limited options to raise badly needed cash, and some analysts believe the government may need to take over. Ousted board member and railroading legend Ed Burkhardt criticises sale-and-leaseback: “I've never known it to work in more than 40 years in the railroad business.” He says capital spending fell after he left the company in 1999 and that the wrong decisions were made after the economic meltdown in Asia. But the company's chief financial manager says the situation will be brought under control by a package of assets for sale. See also Tranz Rail press releases and Google News.

(May 3rd, thanks David Bromage) 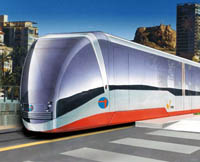 SBB has ordered a further 18 class 185 freight locomotives from Bombardier for Sfr99m on top of the 50 ordered earlier. 150 of the 5,6MW, 140 km/h locos, known as Re482 in Switzerland, are in operation in Germany and Switzerland.

Cut-Price Airlines Catch up to Eurostar

National Express is giving up its 40% share in Eurostar UK, which is losing an estimated £100m a year. Passenger numbers this year are down by 8% because of intense competition from low-cost airlines on the London to Paris and Brussels routes. It is expected that National Express will pass its shareholding to SNCF, which is keen to secure a majority stake in Eurostar UK. Eurostar is being restructured and will run as one integrated company rather than three separate businesses (one for each country served) with their own fleets and depots. (May 15th)

Cross-Channel travellers are taking to the skies with cut-price airlines. Despite a drop in some fares of as much as a quarter, the Eurostar trains have suffered a 14% decline in passenger numbers over the past two years. Lower profits may mean that London and Continental Railways, which owns 50% of Eurostar, will not have money to build its high speed railway between London and the Chunnel. With passenger numbers less than half the original forecasts and still falling, the gap between fare income and charges for using the tracks is widening. See also BBC story.

(May 3rd, thanks Nic Newman)

Kent and Eurotunnel Team Up on Housing?

Kent, the region between London and the channel tunnel, is looking at allowing about 10 000 Britons live across the channel and commute to work in London by paying new cheap fares through the Channel tunnel. For Kent the scheme would help ease the pressure of meeting its target of 116 000 new houses by 2016 set by the deputy prime minister. But its success would hinge on whether the £60 Eurotunnel return fare between Ashford and Lille could be reduced to about £15. (May 3rd, photo André Sintzoff - Mercurio)

In an effort to lower costs and return to profitability, Swedish passenger train operator SJ AB is shedding 700 workers, many of them train staff. The Seko union says this will worsen customer service. Attempts to save money on maintenance of trains and track in recent years have resulted in increased delays and missed connections, resulting in more work for train crews as they help passengers reach their destinations. CEO Jan Forsberg says that more flexible job descriptions for train crew members will mean fewer crew are needed. See also Göteborgs-Posten story and press release. (May 15th)

A business lobby is reporting the Swedish government's rescue of passenger train operator SJ AB to the European Commission. A ruling may not be ready by the 15th September deadline when SJ AB will be liquidated, and the Commission may forbid the government to act before the ruling has been made. The government wants to give SJ AB €202m plus access to cheap loans of €216m. The opposition Christian Democratic party suggests saving SJ AB some money by cancelling SJ AB's vehicle leasing deal with Affärsverket Statens järnvägar and letting SJ AB use the trains for free. This could also form the basis for a rolling stock company, which would level the playing field for other train operators, many of which currently rent their trains from SJ AB. SJ AB was created in January 2001 and took over Affärsverket Statens järnvägar's passenger train services. See also the goverment's plan in PDF.

The US federal government has unveiled a six-year Amtrak reform plan in which the federal government would pay about half the capital costs for passenger routes, mainly new short-distance corridors between urban areas, and states would assume liability for operating costs nationwide. The deteriorated Washington - Boston Northeast Corridor would be leased for 99 years to a federal-state compact that could apply for capital-improvement grants but could also finance improvements through private debt markets. The Corridor would eventually be opened to operators other than Amtrak. Where Amtrak now operates on freight railways, this right could be awarded to another company instead.

The Washington Post writes that the plan could mean that the government spending on passenger rail may rise manifold. It would in any case involve a big shift in funding from the Northeast Corridor, where states pay little, to California and Washington, west-coast states which pay most of the capital and operating costs of their expanding passenger rail systems. New York State Transportation officials say they do not like the plan. The plan faces an uphill battle in Congress, which has repeatedly voted to keep Amtrak running in its present form but has provided far less money than needed to keep the system in good repair.

French SNCF is redecorating 183 TGV train interiors in a style composed by fashion designer Christian Lacroix. Second class will have mostly purple seats, with some breaking off in red, and baggage racks in the middle of the coaches. First class seats will have electrical outlets and will be mostly gray, with rebelious souls being offered a lovely green. But SNCF has toned down the original colours after asking what passengers thought. 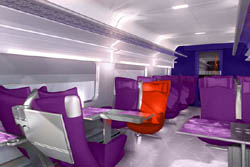 A 950km, $1,7bn new railway between the east and west coasts of Saudi Arabia would transport 30m tons of cargo and 23m passengers a year. The Kingdom has invited the private sector to build it, but authorities are still evaluating options to award the project, with build-operate-transfer being favored. The railway would connect Jeddah on the Red Sea and Dammam on the Gulf, Saudi Arabia’s largest ports. (May 3rd, thanks Jakob Christoffersen)

At least A$1,5bn in emergency funding is needed to fix a catastrophic backlog in essential track maintenance on Sydney's rail network. But even if money is invested now, it will take 10 years to get on top of the delays, according to a report. And the Rail Infrastructure Corporation's management systems are so ineffective that it routinely works at less than 75% capacity, the report maintains.

(May 3rd, thanks David Trinh)