Oz HSR Revived? Plans for a high-speed train link between Melbourne and Sydney, Australia, have been revived yet again. Victorian Premier Steve Bracks on Monday the 28th backed calls by an industry lobby group for a very fast train on the route, which is the third busiest air corridor in the world. Federal Transport Minister John Anderson shelved plans for a high speed train which would eventually have linked Brisbane, Sydney, Canberra and Melbourne earlier this year, saying taxpayers would have been asked to pay A$50bn. David Bromage comments: The A$50bn headline figure was for a fully taypayer funded maglev, the most expensive of all options considered. Conventional high speed trains, either fully or partly privately funded, would have cost much less.

Eight Dead in Bangladesh Eight people died and 30 others were injured in the east of Bangladesh after a moving train hit a stationary one Sunday the 27th. (October 28th)

HSR South of London? First Great Western is investigating a new 322 km/h (200 mph) railway line linking the South West with London. If implemented, the new service could cut journey times from Plymouth to London from an average of four hours to two hours and 20 minutes, and from Cardiff to London to 70 minutes from two hours. See also second story. (October 28th)

Glasgow Airport Link Plans for a rail link to Glasgow Airport have moved forward with the announcement of £7m of investment for public transport across Scotland. The link will provide fast links to both Glasgow International and Prestwick airports and will create a rail network that will allow better use of capacity at all airports. (October 26th)

Belgian East HSR Opens in December Testing of trains on the high-speed railway from Brussels eastward to Liège (and later to Köln) began August 19th. The tests are being done at a top speed of 10% over the allowed limit, thus 220 km/h for conventional trains, and 330 km/h for Thalys (Paris-Brussels-Köln/Amsterdam) trains. Switches/points/turnouts are being tested at 176 km/h for the diverging train path. The signalling system, TBL2 (train balise locomotive), is also being tested. The project also includes a new station at Liège. See also testing documentation, more details and enthusiast page. (October 26th)

FBI Says Al Qaeda May Attack Trains The FBI warns that Al Qaeda may be planning to attack US passenger trains, the New York Times reports. While the bureau has passed dozens of threat warnings to law enforcement agencies since September 11th, the government issued public warnings like this one only six times before. Terrorists may also destroy key rail bridges and sections of track to cause derailments, or target hazardous material containers, the FBI believes. See also BBC story. (October 25th)

Single Tram Network in Melbourne? Melbourne, Australia, is likely return to a single tram network. National Express announced on 17 October it was selling the M>Tram business to Yarra Trams so it could focus on its train and bus operations. The sale still requires State Government and regulatory approval, but could be completed within weeks. The tram network was split up and privatised by the previous state government in 1999.

Possible Rail Expansion in Melbourne Melbourne, Australia, may get 13 new stations to cope with the city's booming population. Cross-town bus links would balance the radial rail network. The plan envisages expansion of the suburban rail network in growth corridors and fast connections to regional cities. (October 13th, thanks David Bromage)

Four Dead in Australia At least four people died when the famous Australian Ghan interstate train hit a car on the tracks Thursday the 24th. The car subsequently hit a schoolbus. Road traffic was backed up to the rail crossing. See also second story. (October 25th, thanks David Trinh)

ETCS Signalling Delays in Switzerland Tests of the new ETCS signalling system in Switzerland are going badly. In five months of testing, reliability goals have not been achieved for a single day, the Neue Zürcher Zeiting reports. Two days before the article was published, six trains were delayed by a total of 62 minutes. This in turn caused delays for 24 other trains, totalling three hours. Switzerland is conducting the largest-scale tests of ETCS, the European Train Control System, and plans to install it on the new 45 km Mattstetten-Rothrist line. The planned number of trains on this line will have to be cut if the system doesn't work in time for the December 2004 opening.

New Tunnel-Boring Machine for Hallandsås Swedish rail administration Banverket plans to use a tunnel-boring machine to build the Hallandsås tunnel, even though the earlier attempt to do so failed ten years ago because the ridge was too porous. The new machine is better, says Simon Taylor, Banverket's British tunnel-boring expert. Details of the project will be determined by the entrepreneur who wins the contract. 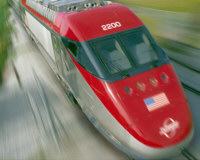 Bombardier Unveils JetTrain Bombardier has developed a 240 km/h turbine-powered locomotive powered by a Pratt & Whitney jet engine. It is designed to offer the speed and acceleration of electric trains without the cost of building electrified rail lines, is 20 % lighter than a conventional diesel unit, and has twice the acceleration. It also passes strict US crashworthiness standards. It has been developed together with the Federal Railroad Administration and was unveiled at Union Station in Washington DC Tuesday the 15th. See also CNN story, Bombardier documentation, and Ny Teknik bulletin. (October 16th, thanks Mario Flores)

Connex Wins Swedish Franchise French Connex will run passenger trains on Kinnekullebanan, a small railway paralleling the main Stocholm-Göteborg line (Herrljunga-)Håkantorp-Hallsberg. Connex' client is Tåg i Väst, a group of Swedish provinces. Connex' bid was 20% lower than that of BK Tåg, which in turn was 20% cheaper than SJ's. The transit authority is considering running limited-stop trains to all the way to Göteborg. See also Tåg-nytt bulletin and more about Kinnekullebanan in Swedish. (October 16th)

BC Rail Discontinues Passenger Trains BC Rail is discontinuing all but one of its passenger services, which are unprofitable. The one remaining is between the rural communities of Seton Lake and Lillooet in the Interior. The 35 km line is the only transportation link between the communities. The Seton Lake Indian Band will handle the ticketing. BC Rail is owned by the government of British Columbia on Canada's west coast. See also statements. (October 16th, thanks Owen Hardy at The Society of International Railway Travelers)

Steam Engine Overturns in Australia Three people died after a level crossing accident outside Victoria, Australia, Sunday the 13th. A chartered train with a steam engine hit a truck, and the engine tipped over. The train was en route to Melbourne. (October 16th, thanks Bob Heywood)

New Plan for British West Coast Upgrade The British Strategic Rail Authority has announced a new £9,8bn plan for the West Coast Main Line upgrade, and lowered the goal of 225 km/h operation to 201 km/h (125 mph). The upgrade will be complete by 2008 and enable 80% more passenger trains to use the tracks, as well as 60-70% more freight trains, plus a doubling of services to four trains an hour from London to Birmingham. New Fiat/Alstom Pendolino trains will begin operating at 201 km/h on a good proportion of the line in the fall of 2004.

The project was initially started by Railtrack and Virgin Trains, and was then costed at £2,5bn. A large part of the increase is due to not moving directly to the new ERTMS wireless signalling system which was considered immature. The conventional signalling system will be upgraded first. The SRA chairman, Richard Bowker, said: "Today's announcement is about the renewal of 1255 km of railway and the elimination of a 20-year maintenance and renewal backlog in the shortest practical time." See also SRA press release and stories at The Independent and The Times, the Scottish perspective, WCML train drivers get pay rise, project outline at Railway Technology, and story from Pendolino roll-out.

Norwegian Signatur Re-testing Norwegian rail administration Jernbaneverket is testing new axles on the BM73 ("Signatur") trains to see if they will allow the train to safely operate at the top speed of 210 km/h. They have been restricted to 160 km/h for two years because the axles are unreliable at higher speeds.

Norwegian Budget Suggests Franchising Subsidised passenger rail will be put out to tender in Norway if the budget bill is passed. The franchising will be tested on two lines first to gain experience; services under the new rules on these lines should start 2004. Profitable lines will not be franchised. See also Aftenposten interview with NSB boss Einar Enger, and Dagens Nyheter story.

København Metro Opening Delayed? The grand opening of København's driverless metro may be delayed since safety authority Jernbanetilsynet hasn't formally okayed safety arrangements, and Metro staff have not yet completed their training. The opening is scheduled to happen October 19th, and Queen Margrethe of Denmark is scheduled to attend. Eleven km will be opened first, with 21 more to follow by 2007. See also Metro press release and IRJ article. (October 5th)